I introduced my kids to Latin Squares the other day. If you know Sudoku then you have seen examples of Latin squares. The idea is to fill in a grid of squares with colors or numbers or some other symbols, such that each symbol appears exactly once in each row and each column. (see also the Wikipedia Latin square entry). I handed them graph paper and let them loose. This is what my eight-year-old produced: Note that she produced some Latin squares, but also explored other ideas. 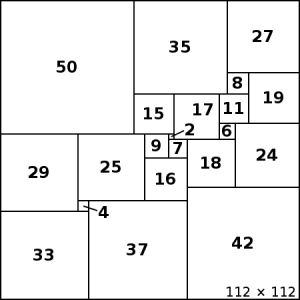 We got excited about it and decided to make one for our wall:

Next, the ten-year-old wanted to produce some squared squares of his own, but found the perfect ones difficult (they were thought to be completely non-existent for a long time after all). He settled for producing imperfect ones. After making an imperfect squared square on graph paper, he decided to reproduce it with Legos. Here is the result:

This led us to considered perfect Legoed squares. That is to say, squares made up of some number of Lego pieces, each piece having a unique size. Here is one of our first examples: 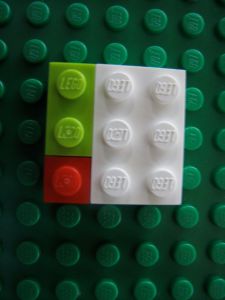 We found a bunch more (maybe ten or so total). I’m not sure that we got all of them. How many can you find?

Look for up-coming posts on: 1) further progress in building our marble computer, and 2) teaching my five-year-old to count (which required some deep thought about just what counting is).

Musings of a Mathematical Mom

Introducing the beauty and elegance of mathematics to little kids, through fun activities and discussions.